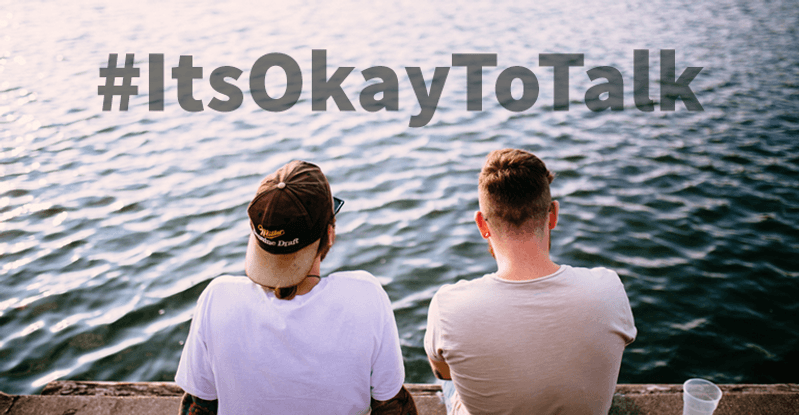 Did you know that men commit suicide 3.5x more often than women? Globally, 510,000 men die from suicide each year – that’s one every minute. White males accounted for 7 of 10 suicides in 2014, with the rate of suicide being the highest in middle age white men. Clearly the numbers suggest a crisis occurring when it comes to men and mental health, but why don’t we hear more about this? Because men don’t talk about it.

You may have seen someone you know on Facebook posting a pic of themselves giving the ‘okay’ symbol with their hand and nominating five friends. People around the world are taking part in the “It’s Okay To Talk” (#ItsOkayToTalk) movement, which is intended to raise awareness on suicide prevention in men, while offering an opportunity to change the narrative around mental health. Posting your picture is a small step towards normalizing and getting people to talk about these highly stigmatized topics.

What are the reasons men are at such a high risk for suicide? Well, for one thing, men are far less likely to seek support when they are struggling. Traditional gender roles and cultural norms have taught men to bottle it up, tough it out or ‘grin & bear it’ when it comes to any challenge. Across the world, men are not getting help soon enough. Having conversations about tough topics is challenging for anyone, but these traditional gender norms have made it infinitely more difficult for men to admit their struggles. Furthermore, men often do not have the internal skills to process emotions and employ healthy coping methods. It is common for men turn to anger, drug, alcohol, or violence when they are suffering.

So what are the ways we can better support the men in our lives? A key step is recognizing how difficult it is for men to come forward when in pain. When they do: LISTEN! If you miss their moment of vulnerability, it may not come back around. The traditional message to ‘toughen up’ is pervasive and can be perpetuated by anyone who attempts to quiet a plea for help. Honor the request for support and be there to help by assisting in finding a mental health professional, locating resources, and expressing your care. Additionally, not only is it typically more difficult for men to talk about their feelings, they process emotions differently. Getting cozy on a couch and grabbing the tissues is usually not their preferred route. But taking a walk, going for a drive, shooting some hoops, or playing darts are a few examples of ways to stimulate the conversation flow with men.

If there is a man in your life you are worried about, please don’t ignore it. Feel free to reach out to me, as I work extensively with men in my practice, or one of the many other excellent practitioners focused on men’s health. And don’t forget #ItsOkayToTalk.

Mend Your Relationship with Small Actions

Is this Postpartum Depression?